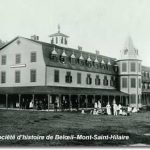 When I was a small child, back in the eighties, we usually spent our summers in a lovely resort about an hour’s run from Montreal by train, St. Hilaire on the mountain top.
The Iroquois Hotel was kept by Messrs. Archie, Bruce and Colin Campbell. The eldest brother lived in the Manor House in St. Hilaire village. Their mother was a member of the well-known French-Canadian family, the Duchesnays. The Campbells were, in conse¬ quence, connected with many historic families of early Canada.

A spirit of gaiety, as I heard later from my mother, pervaded the hotel frequented mainly by the Campbells’ friends. Tennis, boating on the diminutive lake, drives and dancing on Saturday nights, mild diversions but gay for quiet Montrealers in the mid-eighties. What I do remember distinctly was the tremendous excitement of boarding the train in Bonaventure Station, and the half-thrilling, half-dreadful moments of going over the dark Victoria Bridge which, at the time, was a covered bridge; the arrival in the tiny St Hilaire Station late in the afternoon, and being driven in a country buck-board, mother, children and nurse packed in like sardines, up a road so steep I was afraid the carriage would suddenly start going backwards down the hill.

The Iroquois Hotel on the mountain top was, to my childish remembrance, quite wonderful. The food in the separate dining-room, where nurses and children had their meals, was simply delicious, after our simple fare of porridge breakfasts and mutton- steak-rice-pudding dinners at home. There were large, square bath-houses at a little distance from the hotel, where one bathed in water which ran in from a stream in the mountain-side; I shall never forget the delightful fresh smell of the cool pine-scented water, as it dashed over me, our nurse holding us for fear we should be thrown down by its force. Each morning the nurses took their charges for a delightful walk along a woody path which led to the small lake on the mountain top. One day, rather bored with the other children, I started off by myself along a path which forked off from the other. For a bit I rather enjoyed the solitude and the mysterious sensation of being alone in the woods, but my adventurous spirit soon deserted me and I was glad to see the nurse and other children a short distance away.

In a tiny shack beside the lovely little lake, a man sold the most delectable red and white peppermint bulls-eyes, which we were occasionally allowed to buy with our pennies. Father took us rowing on the lake. When I would lean over the side of the boat in an endeavour to pluck exquisite white and yellow water-lilies, I remember being, sternly reprimanded and told to sit quiet. How I loved what were called The Flats on one side of the hotel, a large field fringed with trees and shrubs. Here, for the first time, I came across sumack and cotton plants. Some small bright red apples grew beside every cottage door. Whether they were sweetened by the glamour of youth I know not, but to me they were better than any I have tasted since. A racoon in a cage outside one of these cottages was an added attraction to us children; I could have stood there watching the funny little animal for hours, if not called by an impatient nurse.

How we loved this, our first experience of the country and, oh, how we hated returning to Montreal in the autumn! Sunlight appears to flood those golden days which still cling to the soul of a child. Be that as it may, St. Hilaire still seems to me a delectable, mysterious Utopia.